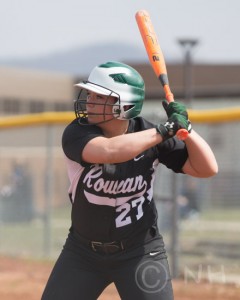 After suffering a tough loss at West Carter on May 1, 2015, the Lady Vikings responded with a 16-1 pounding of the Lady Panthers at Fleming County High School Field in four innings.  It was the largest margin of victory over the 61st District rival since May 21, 2008, when Rowan defeated Fleming 17-2 in six innings.

Freshman Sarah Hallock got things started on the first pitch of the game by beating out the throw on the bunt to get the base hit. Senior Courtnae Bolander punched a base hit up the middle to move Hallock into scoring position at second. After senior outfielder Becca Duff laid down a sacrifice bunt to put Bolander and Hallock at second and third, sophomore Sara Robinson placed a base hit in center field to score both runners. 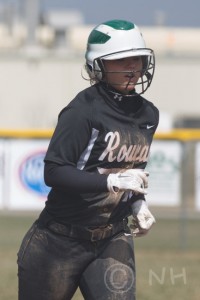 In the bottom of the first inning, Fleming went three up, three down.  The inning ended with RC up 2-0 and they would never look back.

With two outs in the top of the second and Meade and Hallock on the corners, Bolander ripped a double to the left-center fence to plate two runs.  Duff scored Bolander on the next at bat with a double to the same gap. Robinson followed with a base hit to score Duff from second.  With a base hit by senior catcher Lindsey Wilson and junior Kendra Holbrook reaching on an error to load the bases, senior pitcher Abby Hammond ripped a line drive base hit up the middle to score Robinson and 8th grade courtesy runner Emily Hammonds (running for Wilson), completing a six-run frame for RC.

In the bottom half of the second, Hammond fanned the Lady Panthers’ four, five, and six hitters.

The Lady Vikings had another barrage of runs in the fourth inning, sending twelve batters to the plate and scoring an additional 8 runs. The inning featured base hits by Duff, Hammond, Hallock, and Bolander and a triple by Wilson.  Rowan found itself on top 16-0. 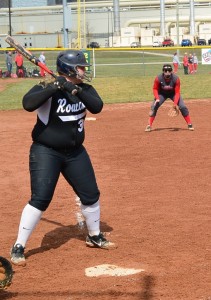 Fleming managed a base hit and one unearned run before the game ended with Bolander getting the unassisted double play at first base.

When it was all said and done, six Lady Vikings contributed hits in the game: Hallock went 3 for 3 with a walk and one RBI; Bolander went 3 for 4 (including a double) with four RBI; Duff was 3 for 3 with a sacrifice bunt and two RBI; Robinson went 3 for 4 with four RBI; Wilson was 2 for 4 (including a triple) and one RBI; and Hammond had two hits in three trips and two RBI. In the circle, Hammond gave up two hits, struck out five Lady Panthers, and walked one.