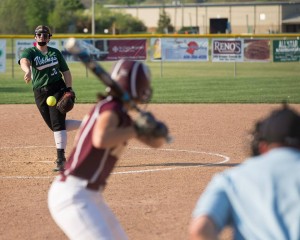 The Rowan County Lady Vikings hosted the Russell Lady Devils Tuesday, May 5 for Senior Night.  RC topped off the evening with a 3-0 victory over the Region 16 opponent.

“This was a big win on a big night” commented Coach Larry Slone.  “This is definitely a win that the girls will remember for a lifetime.”

Lady Viking bats began to show signs of life early.  After registering base hits in the second inning by sophomore Sara Robinson and senior Abby Hammond, Russell retired the side leaving the two runners stranded.  That was just the prelude of things to come.

RC drew first blood in the third frame.  Senior Autumn Meade beat out the throw to first for a base hit and later stole second base.  Senior Courtnae Bolander’s double to the left-center gap scored Meade.  The next batter, senior Becca Duff, doubled to left to score Bolander. 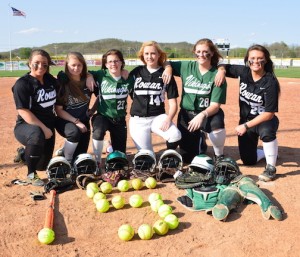 Up 2-0 in the fifth inning, freshman Sarah Hallock got a base hit on a 2-2 count.  Bolander then drew the walk.  Hammond drove a base hit deep in the left-center gap to score Hallock and give RC the 3-0 lead.

The Lady Devils would not go quietly as they attempted to mount a rally in the seventh inning. Russell tallied three base hits in the inning to load the pads with two outs.  Hammond squelched the rally with a big strikeout to end the game and secure the shutout.

Robinson and Hammond led the Lady Vikings in hitting both going 2 for 3 at the plate.  Bolander, Duff, and Hammond each had one RBI.

“Abby pitched fantastic tonight,” Coach Slone said. “We hit the ball well and got timely hits when we needed them.  With the win tonight and last night at Fleming they are starting to believe in each other.”