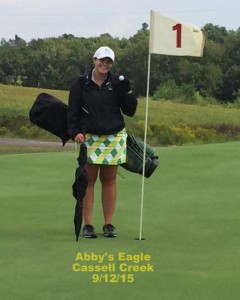 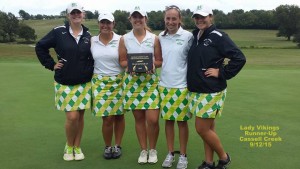 Despite unseasonably cool temperatures and sporadic rain showers, the Girls Golf Team brought in low numbers Saturday to put them in 2nd place in the GRC Invitational. All four seniors post “personal bests” at the tournament leading them to a “team best” of 327. A glimpse into the memorable day; Adrianna Kerns, Kammy Rose, Taylor Kendrick and Allie McKenzie all had birdies on Hole 9, while Abby Moore took a double. Abby made up for it later as she played Hole 1. Abby hit her tee shot onto the fairway, she had a perfect lie as the hole makes a dog-leg left. Abby’s second shot landed on the green about 4 foot in front of hole, the ball took a little bounce and rolled into the hole for Abby to make her first ever Eagle! The day continued with “firsts” as Taylor Kendrick had a “personal best” of 77, Adrianna Kerns “personal best” of 81, Abby Moore “personal best” of 84 and Allie McKenzie “personal best” of 85. The tournament was a great “first” for sophomore, Kammy Rose. It would’ve been difficult for anyone to have known that it was the first time Kammy had played in a golf tournament, meaning it was also the first time she had walked 18 holes carrying a golf bag on her back. Kammy posted a 109. Congratulations Lady Vikings, it was a great day of golf!