The Vikings were able to achieve there first shutouts of the season on Monday vs. Mason County.  The JV played first and were able to come away with a 2-0 win.  Finding the back of the net was Ryan Mullen and Sammy Delgado, who finished a corner from Charlie Whelan.  Defensively the Vikings were very solid with Gabe Markwell and Jason Niehoff, leading the way.  AJ Hacker recorded his first career shutout and made several good saves.

The Vikings were able to shutout the Royals with a 4-0 victory.  This was the first shutout of the season for the Viking.  The back-line of Adam Duff, Logan Napier, Ethan Ratliff, and Drew Mabry, did a phenomenal job of shutting down the Mason County attack.  Conner Barker was able to block or corral any attempt that the Royals had.  The offense got the scoring going early when Jake Eldridge was able to slot home a very nice through ball by Kyland Carreon.  The game was 1-0 at halftime.  Once the second half, was under way, the Vikings got down to business.  Ryan Mullen sent a great back angle ball to Cory Hilton, who made a great one touch finish into the back of the net. Nick Tiedeman was then able to get on the board, by finishing a penalty kick. The last goal was by Adam Duff,  from a corner kick by Nick Tiedeman.  Overall it was a great game by the Vikings. 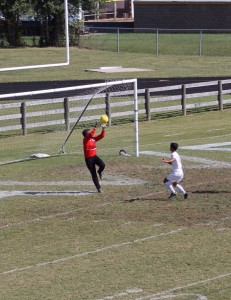