The Lady Vikings traveled to Bowling Green last week to compete in 2015 State Golf Tournament. Despite the wind and rain on Friday the girls were able to push through their nervousness to end up with a Team score of 368. Tee times for team didn’t begin until 11:57am Central Time. The morning hours had been warm and dry. By 12:30pm, the final tee time, the rain began to fall. The wind picked up and the temperature began to drop! It rained so hard at one point that one of the girls reported she couldn’t see her ball once she hit it off the tee. Even though weather conditions were a bit nasty, the Lady Vikings ended up 46 strokes less than what they scored last year at the State Tournament.

Taylor Kendrick (Senior) came in with an 87, Abby Moore (Senior) had a 90, Allie McKenzie (Seniors) had a 95 and Adrianna Kerns (Senior) brought a 96. Kammy Rose (Sophmore) played as the 5th player at the tournament. This was the last appearance for the four seniors who have had an outstanding career! 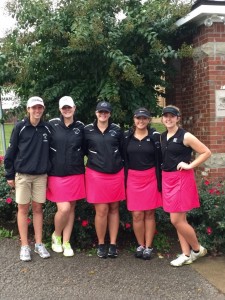 All of the girls have shown tremendous growth this season and we are very proud of them! Way to go Lady Vikings!!